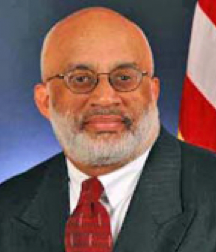 James A. Dula, PhD, is an internationally recognized entrepreneur, civic, community and military leader. He is CEO of James Dula Consulting, a firm that addresses growth and development for CEO’s and managerial teams. He also serves as Commissioner for Small Businesses for the State of Maryland.

A retired military commander, he is a Vietnam veteran who served in the Pentagon Air Force Intelligence and The Air Force District of Washington. He served as Director of Administration and Executive Officer at Andrews Air Force Base in the Presidential Wing, which required interaction with the White House and high ranking U.S. government officials.

After 30-years of military duty, Dr. Dula taught in the Prince George’s County Public School System, where he improved young lives by introducing a challenging college preparation and assistance program.

From 2002-2006, Dr. Dula served as the Health and Human Services Deputy Chief Administrative Officer for Prince George’s County. In this role, he lead the effort to open six new health centers, strategically placed health, youth and family centers in schools and communities, and created additional programs that enhanced the quality of life for more than 865,000 residents who depended on the County’s health and social services.

Dr. Dula is also credited with opening a Youth Strategies Office to address gang issues and youth programs, a Veteran Services Center to address the needs of the 80,000 veterans in the county, which has the largest concentration of veterans in the State of Maryland. He also was responsible for opening the first Women’s Resource Center in Prince George’s County and serving as the former President of the Prince Georges Chamber of Commerce transforming the growth and development of small businesses within the county.

Dr. Dula is known as a social-anthropologist due to the positive results he has accomplished when working with organizations, children, youth, and families. He spent nearly four decades as a senior manager and public administrator at various locations world-wide. As a commissioned officer and organization leader, Dr. Dula has overseen the planning and implementation of various administrative programs. He also has received numerous awards for his work with children, families, communities and women’s organizations.